RULES OF THE GAME

The game of foosball has official rules which have been created and published by the International Table Soccer Federation. The full rules can be found here.

However, we have put together a simplified list of the rules that is suitable for pub/club games, local tournaments and home games.

The winner of a coin toss chooses either to kick-off first or to pick side. The other team gets the remaining option.

The kick-off is a serve from the midfield (5-bar). Subsequent kick-offs go to the team conceding the last goal.

To serve the ball, first ask if your opponent is “ready?”. When they say “ready”, you can begin. The ball must touch two players and then you must wait one second before you pass or shoot.

The ball is ‘out’ if it leaves the playfield, defined as inside the cabinet or directly above it. Restart with a serve by the defender of the team that did not shoot the ball out.

You can score a goal with any player figure on any bar. If the ball enters the goal and bounces out it counts as a goal.

In doubles, the players in a team may only swap positions between balls or during a time out.

The penalty for spinning is a kick-off for your opponent. It’s a spin if the bar rotates more than 360˚ before or after striking the ball.

It’s illegal to bang the rods or move the table. The ball is given to the other team on the nearest rod forward from where the ball was when the jar occurred.

If the opponents cause the ball to wobble while it’s in your possession (e.g. by aggressive shaking of their bars) then your time limits start again.

Reaching into the Playing Area

If the ball is not moving, you can’t pass it from the midfield to the forward or from defence to midfield without first touching a second player figure.

Unless otherwise stated, if you break a rule then the other team has the choice of a kick-off or to continue play from the current position. Other fouls include distracting an opponent and using bad language. 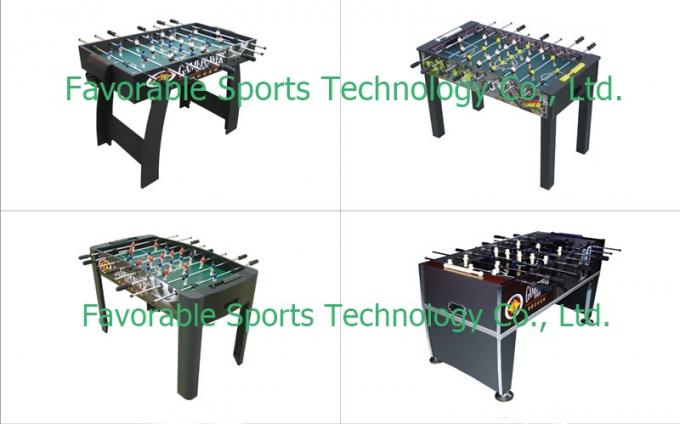